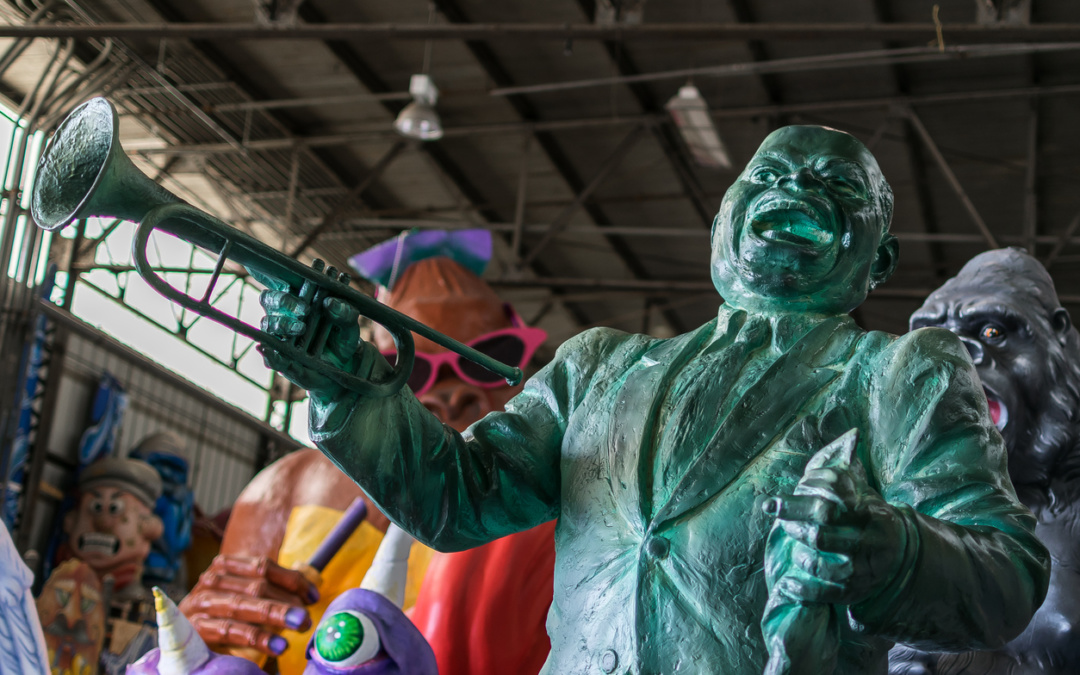 Louis Armstrong was larger than life but, to those who knew him, a relatively quiet and simple man (they said).

His grave, which is located in Flushing Cemetery in Queens, New York, is a testament to that quieter side of the jazz superstar who brought us “Stardust,” “What a Wonderful World,” “When the Saints Go Marching In,” Dream a Little Dream of Me,” and “Ain’t Misbehavin’,” to name just a few.

When Armstrong died in 1971, he left behind a legacy of musical improvisation, including scat singing. Literary critic Harold Bloom placed him on par with Walt Whitman as “the genius of this nation at its best.”

Jazz aficionados who visit Armstrong’s grave may find it a bit surprising. The large, black stone is simple, engraved with nothing more than his name, Louis Armstrong, and the nickname “Satchmo” in quotes. Atop the stone lies a white marble trumpet and a white marble handkerchief.

What does it all mean? Well, here are three things you can learn about Armstrong at his gravesite that might surprise you.

Although the gravestone itself is inscribed with the name “Louis,” Armstrong apparently used multiple spellings and pronunciations of his name throughout his life. He was most commonly referred to as “Louie” or “Lewie” and registered himself for the 1920 U.S. Census using the latter spelling. However, in his 1964 record, “Hello, Dolly,” he refers to himself as Lewis. Musicians and close friends reportedly referred to Armstrong simply as “Pops.” His third wife, Lucille Wilson, publicly referred to him as “Louie.”

Armstrong was known by the nicknames “Satchmo” and “Satch” in reference to the longer version of his nickname, “Satchelmouth.” As a young boy in New Orleans, Armstrong would dance in the streets for pennies. When he received coins from an appreciative audience, he would hold them in his mouth to keep bigger children from stealing them. Another version of the story simply states that friends nicknamed Armstrong “Satchelmouth” because he had a large mouth, and the name was eventually abbreviated “Satchmo.”

Armstrong was known for using a white handkerchief to wipe his face when he perspired, particularly when he was on stage. These handkerchiefs became iconic, and many are preserved at the Louis Armstrong House Museum at Queens College today. Young people in the 1950s often carried similar white handkerchiefs and wiped their own faces with exaggerated mannerisms in an attempt to mimic Armstrong. This is one reason Armstrong’s gravestone bears a white, marble handkerchief.

Louis Armstrong was one of the best-loved musicians in American history, and he made headlines consistently during his life and after his death. In the wake of his funeral, fans actually plundered the graveside for flowers and other mementos just to remember him by. When criticized, they returned, “I just want something to remember him.”

Flowers or not, there is no forgetting Louis Armstrong.